Ruth Dupré wanted to be a classical ballet dancer until her late teens. This first involvement with this artistic discipline has affected her deeply in the way she thinks and creates. Ballet follows a set of strict rules – angles must be just so, lines correct, everything correct, and yet it is communicating every aspect of human experience. This early following of an exact aesthetic principle in fact gave her great freedom when she became an artist. She understood the importance of technique and restrictions, but as they were so familiar, she was able to work with them and around them, rather than be confined by them. Her chosen subjects concentrate on the intimate. Personal experiences of lust, death, love and procreation are vehicles for expression, but often with more than a touch of humour. She has worked in several different materials, predominantly clay, glass, paint and film. Yet there is a tangible continuity, an expressive openness, that connects them all.

Ruth Dupré has exhibited in numerous high profile galleries including the Whitechapel, the Barbican, the Royal Academy, the ICA, and the V & A in London.

She won the Jack Goldhill Prize at the Royal Academy for her glass piece Butchery, and the Bombay Sapphire Prize, for a film she made with Anne Brodie and Louise Gilbert Scott. She has received travel awards from the British Council. Her work is in the collection of the National Portrait Gallery and the Corning Museum of Glass, New York.

Michael Glover, art critic for the Independent, previews her show…

Ruth Dupré makes work that is inspired by the power of religious iconography, revealing how objects of ritual quickly become fetishes and idols. The pieces in this show – paintings, ceramics and glass - circle these themes, but in expressing the humour of sex, death, and worship, they also transcend such boundaries. The work is often irreverent, energetic and funny, but with serious overtones, drawing attention to the nature of social interaction. She flirts outrageously with the organic forms of the natural world.

Like most artists, she makes work to express her personal insights, to point out hypocrisy and falsehoods. Influences are complex and various, from the mummified finger of the 16th century saint immured in its gilded casket, to the power of the palette of Goya. The pieces go their own way, and tell their own stories. Some make direct references; others are more oblique and subtle. Shown together, they make an odd, disjointed statement, yet they are obviously part of the same awkward extended family.

2010   Nominated for the Bryan Robertson Award

2005   Winner of the Bombay Sapphire Glass Prize for video 'Roker Breakfast', made with Anne Brodie and Louise Gilbert Scott

2017   Hatchery and other Fabrications. Arthouse1, London

In Touch with the Past, Fondazione Palzzo Strozzi, Firenze 2013

Camberwell College of Art and Design 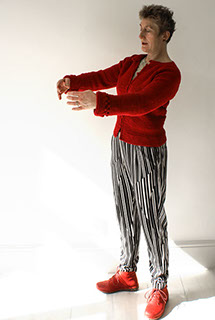 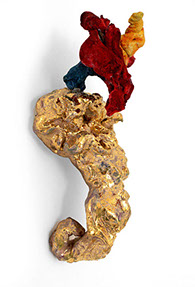